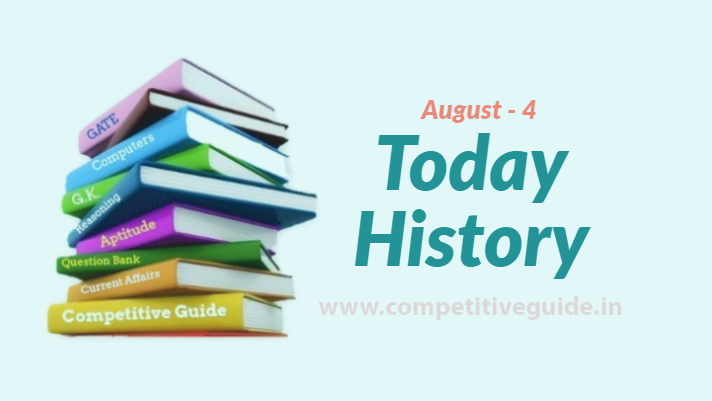 → 2007 NASA launched Phoenix, a robotic spaceship, on a space exploration mission on Mars. The spaceship successfully landed on Mars on May 25, 2008.

→ 2003 Died : Frederick Chapman Robbins, American pediatrician and virologist, Nobel Prize laureate for breakthrough work in isolation and growth of the polio virus, paving the way to development of vaccines.

→ 1995 The Croatian Army and the Army of Republic of Bosnia and Herzegovina started operation Storm in Croatia. The operation was the last major battle of the Croatian War of Independence.

→ 1991 The Greek cruise ship MTS Oceanos sank off the Wild Coast of South Africa. Captain and the crew evacuated from the ship before the emergency signal was made, leaving all passengers on board in ignorance. Later all 571 passengers were saved.

→ 1964 Gulf of Tonkin incident: U.S. destroyers USS Maddox and USS Turner Joy reported coming under attack by North Vietnam. However, due to thick for the crew couldn‘t identify the surrounding ships as the North Vietnamese vessels.

→ 1961 Born : Barack Obama, American lawyer and politician, the 44th President of the United States. He became President of the USA in 2009 and in the same year he received Nobel Peace Prize for his extraordinary efforts to strengthen international diplomacy and cooperation between peoples.

→ 1938 Died : Pearl White, American stage and film actress. She began her career on stage at the age of six and later moved to silent films industry, appearing in number of popular serials. She earned a nickname the Queen of the serials and was noted for doing majority of her own stunts.

→ 1905 Died : Walther Flemming, German biologist, known as the founder of cytogenetics, a branch of genetics that is concerned in the study of the structure and function of the cell.

→ 1901 Born : Louis Armstrong, American trumpet player and singer. He played a foundational influence in jazz, shifting the focus of the music from collective improvisation to solo performance. His influence extended far more than jazz music, and he was widely regarded as a profound influence on popular music in general.

→ 1875 Died : Hans Christian Andersen, Dutch author. He is best remembered his fairy tales, that were translated into more than 125 languages. His best known fairy tales are The Little Mermaid, The Ugly Duckling, The Snow Queen, The Nightingale, The Emperor‘s New Clothes.

→ 1859 Born : Knut Hamsun, Norwegian author, poet, and playwright, Nobel Prize laureate in 1920. His work spanned more than 70 years and showed variation with regard to the subject, perspective and environment. He published a collection of poetry, more than 20 novels, short stories and plays and some essays.

→ 1853 Born : John Henry Twachtman, American painter, best known for his impressionist landscapes, whose style is considered to be among the most personal and experimental of his generation. He is famous for paintings Landscape, Branchville, Wild Cherry Tree, Fishing Boats at Gloucester, The White Bridge.

→ 1822 Died : Kristjan Jaak Peterson, Estonian poet, commonly regarded as the founder of modern Estonian poetry. He died of tuberculosis at the age of 21, leaving only two small books of his works.

→ 1789 Feudalisms was abolished in France: members of the National Constituent Assembly took an oath to abandon their privileges.

→ 1525 Died : Andrea della Robbia, Italian sculptor, regarded as one of the most important artist of ceramic glaze of the times.

→ 1521 Born : Pope Urban VII, (Giovanni Battista Castagna), known for the shortest papacy, that lasted only for 12 days, in the history.